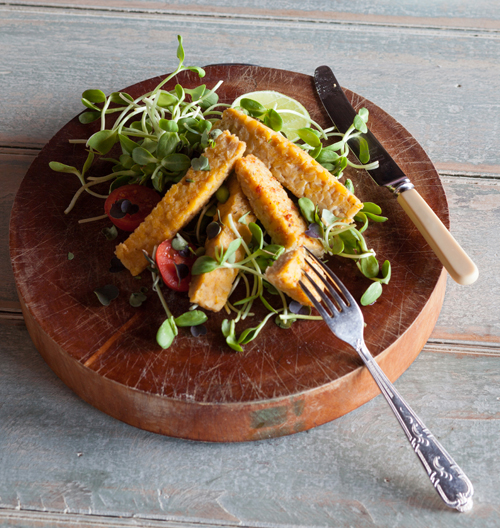 A delicious meal that can be re-invented endless ways by subbing the slaw for a salad leaf mix and mixing it up with different sauces, marinades or dressings such as ginger and sesame, chilli mayo or a honey miso glaze. Below is a favourite and great go-to dish when cooking for friends who don't eat meat or dairy. Serves 2

4-6 tbsp plant based Nuttelex for frying

1Place garlic and ginger into a food processor and pulse until finely chopped.

2Then add lime juice, honey, balsamic vinegar, plus coriander leaves and do quick pulses to blend all together.

3Next, turn food processor on, slowly adding olive oil until fully incorporated into the dressing. Season to taste with salt

2Toss tempeh through seasoned flour, rubbing the mix well into the tempeh

3In a large heavy based saucepan or electric wok heat Nuttelex over a high heat. Add tempeh a few pieces at a time so as not to cool the oil as this will increase the cooking time.

4Fry each piece until lightly golden – about 10-12 minutes. Drain well on paper towels.

1In a large bowl, toss sprouts, cabbage, oil and vinegar together. Season slaw with salt and pepper.